his tab is for the intro solo to "Sweet Child O' Mine" by Guns N' Roses.

The song was featured on the band's debut album, "Appetite for Destruction" in July of 1987. Here Duff McKagan describes the song:

"The thing about 'Sweet-Child,' it was written in five minutes. It was one of those songs, only three chords. You know that guitar lick Slash does at the beginning? It was kinda like a joke because we thought, 'What is this song? It's gonna be nothin', it'll be filler on the record.' And except that vocal-wise, it's very sweet and sincere, Slash was muckin' around when he first wrote that lick."

Duff McKagen grew up in Seattle, Washington. He received his first bass lessons by his brother. He moved to Los Angeles in 1983 and met Slash while working as waiter.


Here is the tab--have FUN! 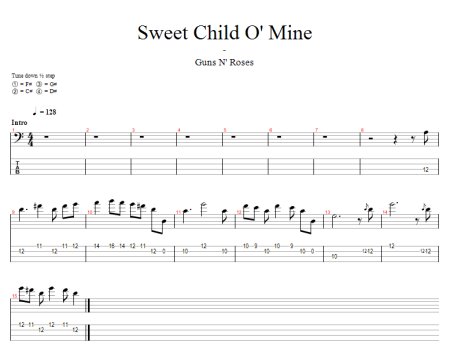