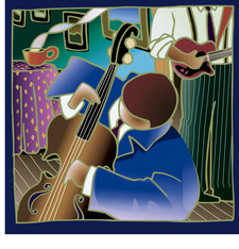 The history of the blues and blues progressions is a whole study in itself and many volumes have been written about it. This is intended to be just a brief and interesting story of how the blues began.

Actually it began with the Africans, for whom music was a vital form of expression in their daily lives. When they were brought to the colonies as slaves, their musical traditions came with them. One of the characteristics of this African music was the "bending" of tones"--the exaggerated use of the slur or slide where a tone is bent upward or downward, often to no specific tone.These bends often occurred in the form of bending a minor third up to a major third or of bending a fifth down to a flatted 5th.

The planters did not particularly care what the slaves did as long as the work was done, so the slaves would play their drums and sing and dance when they were not working. was large field in New Orleans (called Beauregard Square today) where slaves were allowed to gather on Sunday to sing and dance. It washere that the European musicians first encountered "bent notes" and jazz and the blues were born.

12 bar blues chord progressions are spelled out in Roman numerals corresponding to chords built on specific tones in the major scale:

The numerals refer to the first, fourth, and 5th notes in a major scale (or KEY) Thus, the blues progression is called a "I IV V" progression. Here is a table showing the I, IV, and V chords in several common blues keys:

The letters under the "I" are the names of the scale or key.

To play in other keys, just plug the chords from the chart into the progression.

Want to practice your blues progressions and solos with a Professional Blues Band?

Now for the MINOR blues progression: